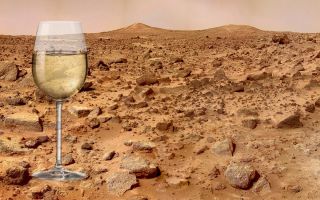 The first human colonists on Mars will have to forgo many of the creature comforts of Earth — things like enjoying an ozone layer, for example, or opting out of rearing genetically engineered Martian babies. Fortunately, one essential earthly amenity these hardscrabble colonists may not have to give up is wine.

Georgia, a country with an 8,000-year-old viticulture tradition, is putting its top space and wine scientists to work figuring out how to grow grapes on Mars.

The project, named IX Millennium, ostensibly as a nod to Georgia’s ninth millennium making wine, will involve several phases of research into building an agricultural infrastructure on Mars. One critical step: identifying the grape varietals on Earth best equipped to withstand the harsh radiation, fearsome dust storms and severe temperature swings of the Red Planet. This research could help hydrate permanent settlements on Mars a soon as 2024 — the year when SpaceX founder Elon Musk intends to launch the first crewed mission there. (NASA hopes to follow in the 2030s.) [Mars InSight Photos: A Timeline to Landing on the Red Planet]

«If we’re going to live on Mars one day, Georgia needs to contribute,» Nikoloz Doborjginidze, founder of Georgia’s Space Research Agency and an adviser on the wine project, told The Washington Post. «Our ancestors brought wine to Earth, so we can do the same to Mars.» (The origins of wine are still debated, but Georgia holds a valid claim thanks to their recent discovery of an old wine-stained pot dated to 6000 B.C.)

The first wine on Mars

The new space wine project will kick off later this year with the installation of «vertical greenhouses» inside a hotel in the capital city of Tbilisi, according to Georgian news agency Agenda.ge. There, floor-to-ceiling pods of soil and seeds (including grapes, strawberries and arugula) will be left to grow under hydroponic lights with minimal human interference, simulating the possible conditions of a controlled agriculture pod on Mars.

In the meantime, Georgian wine experts are hard at work trying to figure out which grape varietals might best survive harsh Martian conditions. Over the next few years, researchers at Tbilisi’s Business Technology University plan to simulate a Martian environment in the laboratory, exposing soil samples to subzero conditions, high carbon monoxide levels and thin air meant to mimic the atmospheric pressure at «20,000 feet [6,000 meters] altitude on Earth,» The Washington Post reported.

These experiments likely will not bear fruit until at least 2022, but scientists already have a hunch that white wine will fare best on the Red Planet.

«Whites tend to be more resistant to viruses,» Levan Ujmajuridze, director of Georgia’s vineyard Laboratory, told The Washington Post. «So, I’d imagine they’ll do well against radiation, too. Their skin could reflect it.»

These experiments could well provide future Martians with grapevines — but the actual fermenting, bottling and aging would be up to them. Nobody knows exactly how fermenting grapes in microgravity will actually work yet, but NASA scientists think it’s possible.

The Georgia team’s boozy experiments aren’t the first foray into space agriculture. Astronauts aboard the International Space Station (ISS) have already begun growing salad crops in microgravity, while China’s recently deployed Chang’e-4 lander will attempt to grow potatoes and rockcress (a flowering plant similar to cabbage and mustard) on the moon.

The makers of Budweiser, meanwhile, have launched barley seeds into space three times in hopes of becoming «the first beer on Mars,» while a batch of Ardmore scotch whisky spent three years aboard the ISS from 2011 to 2014. That project showed Earthlings that even an old drop of the pure is apparently not immune to the ravages of microgravity; the scotch reportedly came home tasting of «antiseptic lozenges» and «rubbery smoke.»

Brandon has been a senior writer at Live Science since 2017, and was formerly a staff writer and editor at Reader’s Digest magazine. His writing has appeared in The Washington Post, CBS.com, the Richard Dawkins Foundation website and other outlets. He holds a bachelor’s degree in creative writing from the University of Arizona, with minors in journalism and media arts. He enjoys writing most about space, geoscience and the mysteries of the universe.

Smoking Pot Just Once May Increase Teen Brain Volume: Why That Could Be Bad | Live Science