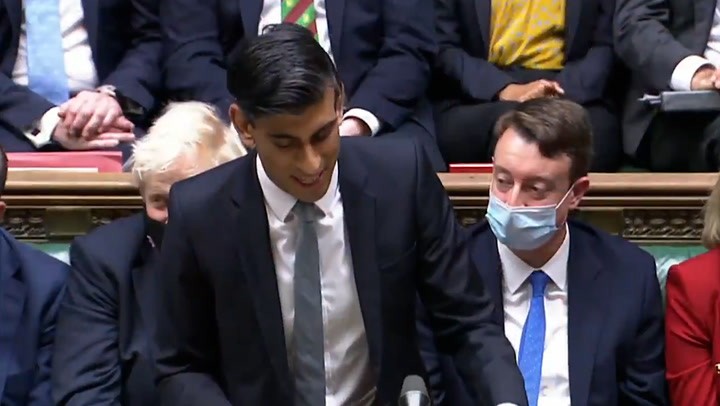 Unlike several chancellors who went before him, teetotaller Rishi Sunak chose water over alcohol today as he delivered his Budget to MPs in the Commons — but there was a boost for drinkers as he announced plans to slash duty on alcohol, meaning cheaper pints from as early as Wednesday night.

But some observers joked that Mr Sunak must have been drunk on something by announcing a cut to air passenger duty ahead of the crucial Cop26 climate talks in Glasgow next week, where Boris Johnson is tasked with getting world leaders to agree on new targets to reduce emissions, improving on those set out in the 2015 Paris Agreement.

Archaic parliamentary rules dictate that chancellors are allowed to have a drink as they set out their spending agenda. And many former occupants of 11 Downing Street have availed of the opportunity to have a sip on their favourite tipple to settle the nerves before revealing how they plan to spend taxpayers’ hard-earned cash.

Whisky was the poison of choice for former Tory chancellor Kenneth Clarke. Before him, Nigel Lawson, Margaret Thatcher’s No 2, opted for a variety including Ashbourne Water and a mixture of wine and Malvern water. Hugh Dalton, the former Labour chancellor, went for a rum and coke.

Historians, academics and experts are stumped on where the parliamentary rule comes from and there is very little written about the tradition, which allows chancellors to have a drink at the dispatch box on Budget day only.

In his 1995 Budget speech, Mr Clarke was cheered by his Conservative colleagues as he took a sip of scotch before announcing cuts to duty on whisky and a freeze on wine and beer duty. In a bygone era, speculation was usually rife as to what alcoholic drink the chancellor might choose on budget day, with bookmakers taking bets on what brand might appear at the dispatch box.

While more recent Budget days have tended to be “dry” affairs with the chancellor more likely to have a glass of water rather than whisky at their side, there is still fun to be had for punters who fancy a flutter.

Gamblers can get odds on how many sips of water the chancellor might take of said beverage, how long the speech might go on for and how many times they are expected to mention words such as “tax”, Mr or Mdm speaker and “British people”.

Budget day drinking is just one of many old and odd traditions in Britain’s parliament. When a new Speaker of the House is elected, the successful candidate is physically dragged to the chair — currently occupied by Sir Lindsay Hoyle — by other MPs.

According to parliament’s website, “this custom has its roots in the Speaker’s function to communicate the Commons’ opinions to the monarch.”

“Historically, if the monarch didn’t agree with the message being communicated then the early death of the Speaker could follow. Therefore, as you can imagine, previous Speakers required some gentle persuasion to accept the post,” it adds.

A host of words are banned in the Commons, some of them seemingly more innocuous than others. “Blackguard”, “pipsqueak” and “pecksniffian” are said to be some of the words that can get MPs thrown out of the Commons.

It is also against the rules for MPs to accuse their colleagues of being liars, as Labour’s Dawn Butler found out to her cost as recently as July. The MP for Brent Central was ordered to leave the chamber after she refused to retract allegations that Boris Johnson, the prime minister, is a liar.  Dennis Skinner, the former Labour MP for Bolsover, was also ejected for making a similar accusation against ex-PM David Cameron.

Another bizarre procedure bans MPs from talking about the Lords in the Commons.

Covid: Is it safe to hit the office Christmas party?